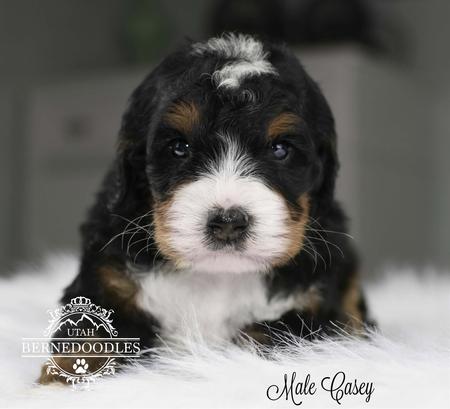 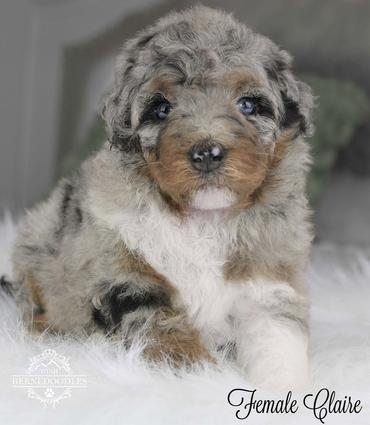 What is The Bernedoodle Lifespan?

Bernedoodles are expected to live 10-16 years. When choosing a Bernedoodle puppy make sure you are purchasing a puppy from an experienced breeder that does all the required health testing for the breed. Health testing is not just saying my vet said this dog is healthy. DNA health testing can be down using pawpritns genetics and hips, elbows, heart, and eyes can be done with OFA or Pennhip.

Bernedoodles are generally healthy, but like all breeds, they're prone to certain health conditions. Not all Bernedoodles will get any or all of these diseases, but it's important to be aware of them and choose a breeder that is breeding away from genetic disorders.

If you're buying a puppy, find a good breeder who will show you health clearances for both your puppy's parents. Health clearances prove that a dog has been tested for and cleared of a particular condition.

In Bernedoodles, you should expect to see health clearances from the Orthopedic Foundation for Animals (OFA) for hip dysplasia (with a score of fair or better) or a Pennhip rating of 50% or better, elbow dysplasia, and heart. You should see DNA testing for VWD and DM in Bernese Mountain Dogs and DM, GM2, Oste, and PRA in poodles.

We use Pawprints genetics for all of our DNA testing. On each dogs profile you will see a line where you can see all DNA testing!

Patellar Luxation: Also known as slipped stifles, this is a common problem in small dogs. The patella is the kneecap. Luxation means dislocation of an anatomical part (as a bone at a joint). Patellar luxation is when the knee joint (often of a hind leg) slides in and out of place, causing pain. This can be crippling, although many dogs lead relatively normal lives with this condition. We have not seen this in larger breed. This is generally a small dog problem.

Ear Infections: These can be a problem for Bernedoodles because of their floppy ears, which trap moisture. Check and clean the ears regularly. Poodles are prone to ear infections.

Hip Dysplasia: This is an environmental or inherited condition in which the thighbone doesn't fit snugly into the hip joint. Some dogs show pain and lameness on one or both rear legs, but others don't display outward signs of discomfort. (X-ray screening is the most certain way to diagnose the problem.) Either way, arthritis can develop as the dog ages. Dogs with hip dysplasia should not be bred — so if you're buying a puppy, ask the breeder for proof that the parents have been tested for hip dysplasia and are free of problems. Both Bernese and standard Poodles are prone to hip dysplasia.

Elbow Dysplasia: Similar to hip dysplasia, this condition is also a degenerative disease. It's believed to be caused by abnormal growth and development, which results in a malformed and weakened joint. The disease varies in severity: the dog could simply develop arthritis, or he could become lame. Treatment includes surgery, weight management, medical management, and anti-inflammatory medication. Bernese are prone to elbow dysplasia.

Progressive Retinal Atrophy (PRA): This is a family of eye diseases that involves the gradual deterioration of the retina. Early in the disease, affected dogs become night-blind; they lose sight during the day as the disease progresses. Many affected dogs adapt well to their limited or lost vision, as long as their surroundings remain the same. Poodles are prone to PRA.

Von Willebrand's Disease: Found in both dogs and humans, this is a blood disorder that affects the clotting process. An affected dog will have symptoms such as nosebleeds, bleeding gums, prolonged bleeding from surgery, prolonged bleeding during heat cycles or after whelping, and occasionally blood in the stool. This disorder is usually diagnosed between three and five years of age, and it can't be cured. However, it can be managed with treatments that include cauterizing or suturing injuries, transfusions before surgery, and avoidance of specific medications. Bernese are prone to VWD

Gastric Dilatation-Volvulus: Also called bloat, this is a life-threatening condition that can affect large, deep-chested dogs such as large Bernedoodles. This is especially true if they are fed one large meal a day, eat rapidly, drink large volumes of water after eating, and exercise vigorously after eating. Bloat is more common among older dogs. GDV occurs when the stomach is distended with gas or air and then twists (torsion). The dog is unable to belch or vomit to rid himself of the excess air in the stomach, and the normal return of blood to the heart is impeded. Blood pressure drops and the dog goes into shock. Without immediate medical attention, the dog can die. Suspect bloat if your dog has a distended abdomen and is salivating excessively and retching without throwing up. He also may be restless, depressed, lethargic, and weak, with a rapid heart rate. It's important to get your dog to the vet as soon as possible if you see these signs. Bernese and standard poodles are prone to bloat. This is not usually a problem small dogs have.