We love all Bernedoodles and think it is fun to watch the color change but our ultimate goal has always been to produce Bernedoodles that resemble the Bernese mountain dog. It has been a long journey and I am excited to see what Jack has in store for our Bernedoodle program. One of the reasons it was such a long journey is because for decades the fading gene has been bred into poodles. I was not able to breed a non-fading poodle from my own lines because of the time it would take to breed out the fading gene. I had to find a breeder that already had the lines that have been worked on for decades. Even with decades of moving away from the fading gene it is very possible puppies will still fade out or lighten up. Our goal is to reduce the lightning of the rust color in our Bernedoodles. You can learn about the Rufus Gene here.

We searched through Jacks pedigree contacting breeders and families to see if the dogs in his lines faded and to see what age the fading started. Most of the families said they did not fade but darkened up with age. The creams turned red, the apricots turned dark red, and the browns stayed brown or went a shade darker.

When Jack was first born his rust was a lighter color, as he got older his rust turned a deep dark rust and rust spots came in on his legs. He has a rare dark rust color on his brows, checks, legs, and back-end and his black is jet black. Instead of getting lighter with age his coat is getting darker and we love it! We cannot wait to see how his puppies turn out.

Here at Utah Bernedoodles, we cannot wait to see his puppies in 2018! He shows great promise. We are so pleased with him that we will have a Pure Poodle litter with him sometime in the future to replicate his perfection so we can continue to have the best Bernedoodles around. 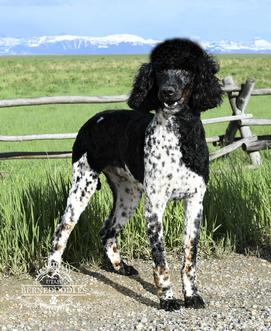 Jack is Utah Bernedoodles' new and very long awaited standard poodle stud for our standard Bernedoodle puppies program. Jack is 65 pounds and 24' He has a shorter muzzle with a square build.

When I was looking to replace my standard poodle Trip to get the same beautiful tricolor Bernedoodles he produced, I didn’t realize how hard it would be and how long it would take to find the perfect poodle stud to replicate what we had with Trip producing the stunning tri-color Bernedoodle consistently with the white of the Bernese.

Jack comes from long lines of poodles that carry the Rufus gene. The Rufus gene is rare, generally appear in apricot lines, and appear to be the result of a separate gene. Willis, citing Robinson, talks about "rufus" genes, that are poorly characterized, but may act to darken an apricot or brown coat. As the poodle pedigrees for reds suggest only one such gene, I propose that it be called F (rufus; R is already used for roan). The recessive allele, f, produces red in an apricot (i.e. eeff), and may also affect brown, but is supposed to have no effect on black. In my terms, the Rufus gene is the reverse fading gene meaning that instead of going from black to grey or rust to tan the coat will go from black to jet black and the rust will go from rust to deep rust.

Now that we talked about his coat color lets go over the best part of him! His health and temperament. His health and temperament cannot be beaten!! He comes from over 5 generations of health tested parents. He is genetically clear for all poodle disease that can be tested for. Over half of all Bernese Mountain Dogs tested for Degenerative myelopathy per PawPrints genetics are carriers so we are excited that he is not a carrier for Degenerative Myelopathy. He will be a perfect match for anyone of our Bernese girls.

The technique assesses the quality of the canine hip and quantitatively measures canine hip joint laxity. The PennHIP method of evaluation is more accurate than the current standard in its ability to predict the onset of osteoarthritis (OA). Osteoarthritis, also known as a degenerative joint disease (DJD), is the hallmark of hip dysplasia. You can learn more about PennHip here.

He is one of the calmest poodles I have seen. Even as a young puppy he was never overly hyper or energetic. From day one he was my son’s shadow. He has literally never jumped up on any of my children. He didn’t have to be taught to be careful he seemed to just know. He is not dominating and doesn’t have a mean bone in his body. He gets along with all the other dogs even my mini poodles that think they are big and tough. He will let them think they are big and tough and just walk away. He is the peacemaker in the family.

I could go on and on about how much I love this dog. I don’t think it gets much better than him. He is the perfect example of what a poodle should be and I am thankful to have him in our Bernedoodle program. He is calm, loving, temperament will pass to his Bernedoodle puppies.