All Puppies should not leave their mom and littermates before eight weeks of age and fully weaned whether you are getting a Bernedoodle or another breed. We start the weaning process around 3-4 weeks of age depending on the litter. Puppies are usually fully weaned by the time they are 6-7 weeks old. Even if puppies are fully weaned younger than 8 weeks they should stay with their litter mates until they are 8 weeks old. The mother dog has so much to teach the new puppy; lessons that will affect him all his life, and his littermates teach important lessons as well.

Puppies who leave their canine family too early will show immediate behavior problems. They will be fearful of many things and show a lack of confidence. They can also be slow to bond to people or will go the other direction, attaching so strongly to their new owners that they will panic when left alone. The ability to soothe himself, to relax when left alone, is missing with most puppies taken away from mom and litter mates to young.

Biting is common in puppies that are taken away from mom and litter mates to early. The mother dog teaches the puppy to control his biting as do the puppy’s littermates. When puppies go to their new home, some biting is to be expected, as all puppies experiment. But when deprived of these early lessons, the puppy will bite more and harder, and teaching him that biting is not allowed is more difficult.

House training problems are also more common with puppies taken away from mom and litter mates before 8 weeks. First of all, when new owners bring home a puppy, no matter what the puppy’s age, they begin house training lessons. However, a three-, four-, or even six-week-old puppy is not yet ready for these lessons. His bowel and bladder control is not yet mature and he will relieve himself when he needs to go, no matter whether he’s in the house or outside.

Puppies taken away from mom and litter mates to young won’t know how to act with other puppies or dogs, and because they act differently, other dogs will react badly to these puppies. Since their mother didn’t have the chance to teach the puppy how to be a dog, he will always be socially inept.

In 26 states, the age at which puppies may be separated from the mother dog or sold is defined by law. Of those, 22 say that puppies must be eight weeks old before they can be sold. Three states—Wisconsin, Virginia, and Maine—require that puppies must be seven weeks old.
Some states focus on the age that a puppy can be separated from his mother. Illinois, for example, requires that a puppy be at least eight weeks old before he can be taken from his mother.

Before buying any puppy, the more you know the better. If an unscrupulous person produces puppies and knows that he can sell them early at six to seven weeks (or earlier) and avoid paying for food, veterinary care, or other costs, then that cycle will continue. But if more people say no, then perhaps that cycle of human behavior can be changed.

I know everyone is excited to bring their new puppy home but for the health of your puppy please do not bring your puppy home before they are 8 weeks old. If you are buying from a breeder and they will not keep the puppy until they are 8 weeks old RUN!! An ethical breeder wants what is best for all of their puppies and will keep them until they are old enough to go home even though there are extra cost associated with food, vetting, etc… 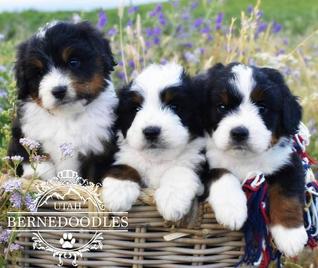 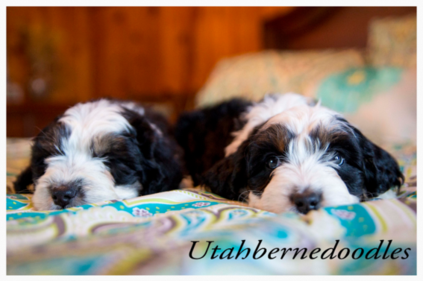 What Age Can I Bring My MiniBernedoodle Home?

The reason we like to keep our Mini Bernedoodles longer than our standard Bernedoodles is because our Mini Bernedoodles are smaller than our standards. We do not let puppies go home until they are over 5 pounds. During the extra week they are with us, we continue to socialize the puppies. This extra week gives us time to put extra fat on your puppy so when your puppy goes home they have enough fat reserve to handle the stress of moving without skipping a beat.

Why should Bernedoodle puppies stay with mom and litter mates until 8 weeks?

The short answer for a Mini Bernedoodle is 9 weeks.

We do not take our Mini Bernedoodle Puppies away from their litter before 8 weeks of age. We like to keep our Mini Bernedoodle puppies with their litter until they are 9 weeks old.
When puppies are taken from their litter too early, it could very likely affect their behavior and personality. The odds of displaying fearfulness, destructiveness, excessive barking, food possessiveness and attention-seeking are greater for dogs that are removed from their litter too early during the socialization period. Because we want the very best for our puppies and for you as you start to form your new relationship, your puppy must stay with us for at least 8 weeks.
We ask that all families take their puppy home by or before 10 weeks.