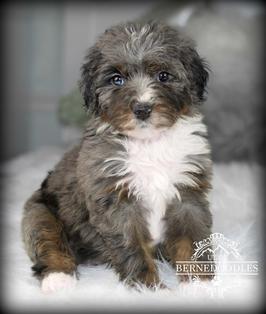 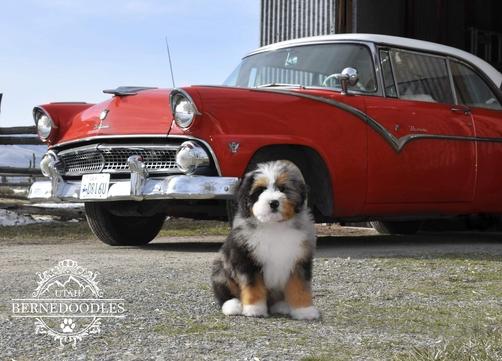 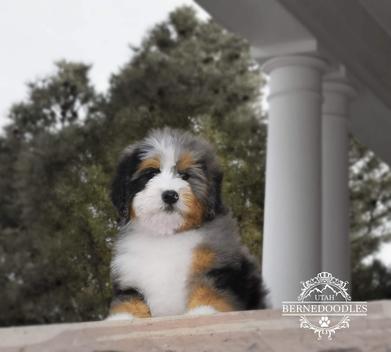 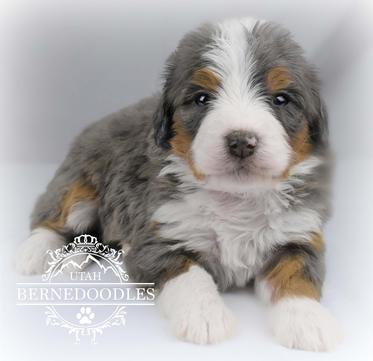 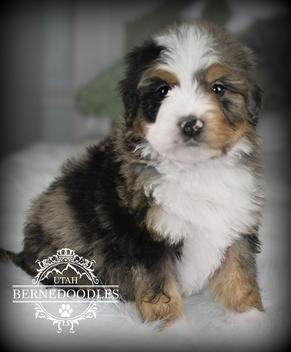 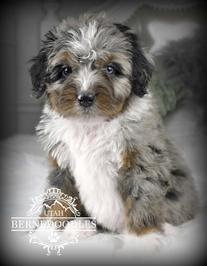 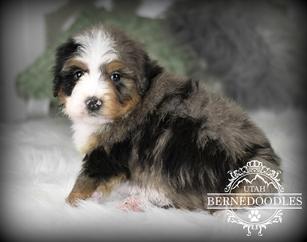 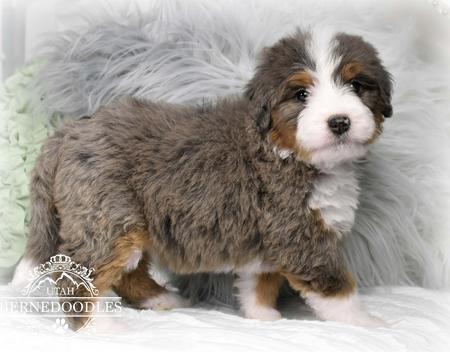 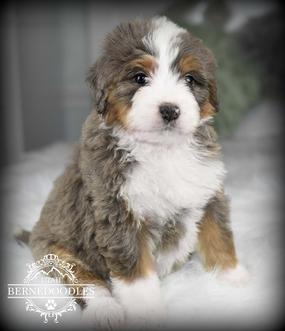 Where does the merle gene come from and how it got in the poodle gene pool?

I get this question all the time.  I have done a lot of study of the merle gene in the poodle gene pool and believe that it was not caused by introducing another breed into the gene pool but, in fact, it is a mutation that occurred naturally.

Merle is probably the most mis-understood and hotly debated dilution gene in the poodle. Many believe it must be a recessive gene because it doesn't affect the appearance of red, apricot and red or diluted colors such as blues and silvers. In addition, it can be hard to see or not evident at all on black and brown dogs (cryptic).  Not only is its appearance illusive to breeders but it has confused scientists and it is still not completely understood.  The merle pattern has been studied many times and the last study released in 2006 emphatically stated  that merle was caused by a mutation in the gene called SILV or PMEL17. The research was believed to be so solid that tests were offered to breeders to identify Merle in their dogs. However, as of March 2009 the company who owned the patent for the test, Idexx, stopped offering tests as they discovered the scientists
identified the wrong gene. SILV is not responsible for merle. The gene they decided was merle (SILV) actually turned out to be for a form of piebaldism- not merle.

One theory is that piebaldism may be issue when connected to merle- or it may be piebaldism itself that is the issue.
Another theory is "The Misidentification Theory."  It is believed that merles have been in the breed and that merle is a "natural" occuring pattern in the breed. However, it is said - rightly so - that merles have often been misidentified as other colors.
Then there is the "The Cryptic Merle" theory. This theory is actually a subcategory of the Misidentification Theory. Merle is what is called a "modifier." That means it "modifies" (i.e. changes) a coat color that has already been determined by genes at other locations. If merle acts on a black coat, the result is blue merle. If it acts on a chocolate coat, the result is red merle. And so on.

The final theory I have is that that merles have been in the breed and that mere is a "natural" occuring pattern in the breed, and that merles have often been misidentified as other colors. When I called AKC to register Chuck and asked about the color code to give him they said to give him code 146 and 002 This refers to a a red and white dog with black markings. This leads me to believe that when looking at the color pedigree 5 or 10 generations back you would not know if the dog was actually a merle or a parti meaning merle could be in the pedigree without proper identification. 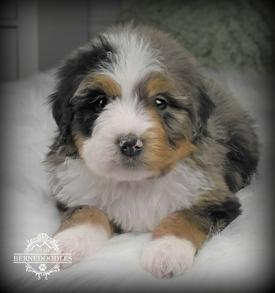 Merle can affect all coat colors. The merle forms of brown and black are usually called "red" (though this is not correct; red and merle are genetically different) and "blue" as patches of blue are formed throughout the coat. Merle is a dilution gene just like the blue, chocolate in a traditional color but without the color of blue DNA. Merle has its own colours and DNA; a blue merle is a dog who has blue patches on its body, red and some are chocolate or "cookies and cream". Dogs who are recessive red can still be affected by merle, but the patches are either hardly seen or, if the dog is a clear recessive red, are not visible at all. Combinations such as brindle merle exist, but are rare.
In addition to altering base coat color, merle also modifies eye color and coloring on the nose and paw pads. The merle gene modifies the dark pigment in the eyes, occasionally changing dark eyes to blue, or part of the eye to be colored blue. Since merle causes random modifications, however, both dark-eyed, blue-eyed, and odd-colored eyes are possible. Color on paw pads and nose may be mottled pink and black.Color on the nose may be black, blue, or red.

The most common Merle patters are Blue and Chocolate/Red. 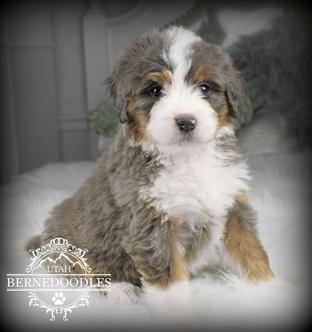 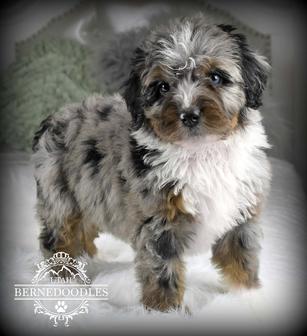 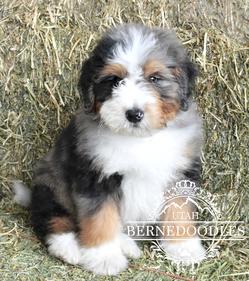 What is a Merle Bernedoodle? 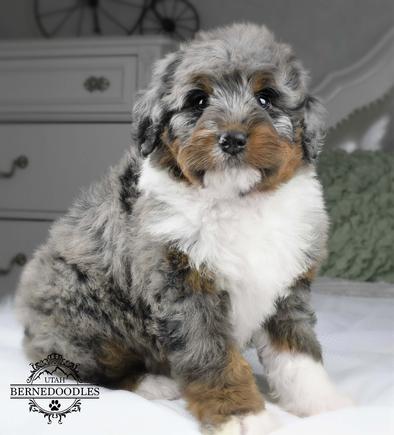 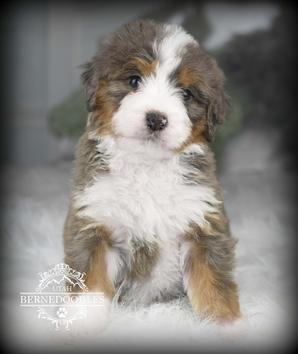 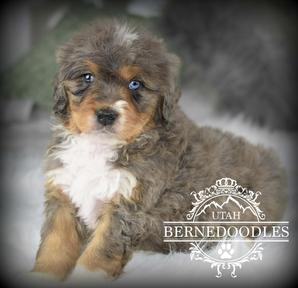 What are the most common Merle patterns in Bernedoodles? 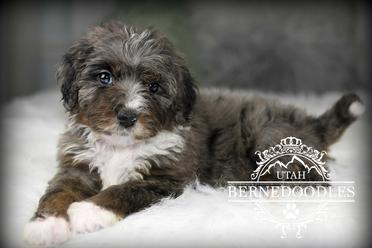 How is a Merle Bernedoodle produced? 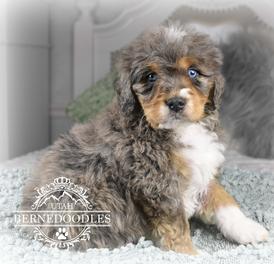 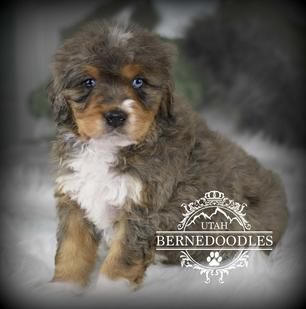 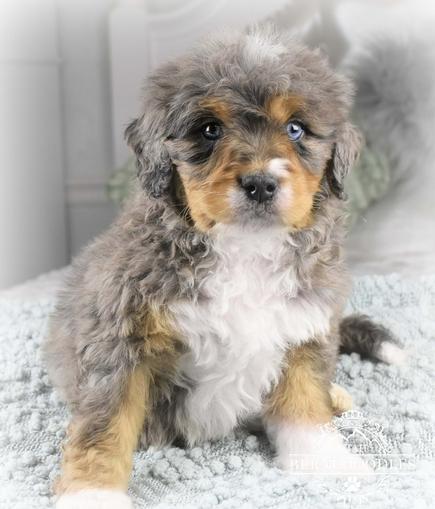 Merle is a term used to describe the pattern of a dogs coat.

Merle is a dilution gene, that is, it lightens whatever the coat color would otherwise have been. The lightening is not spread evenly over the coat, but leaves patches of undiluted color scattered over the dog's body. Also, the lightening seems to work primarily on the black pigment in the coat. 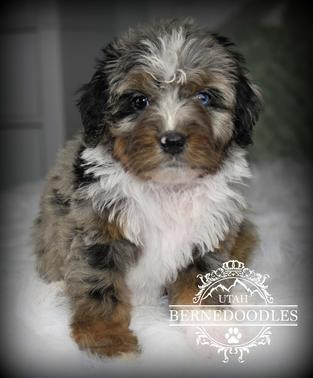 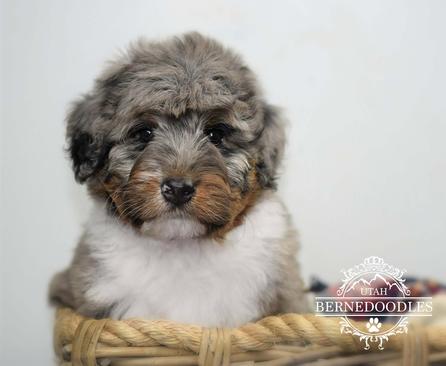 Merle refers to the pattern in the coat and is not a color as such. The white and gray patterns that appear on a black make them appear to have a blueish cast. These are called blue merles. Merle is a color combination in dogs' coats. It is a solid base color (usually red/brown or black) with lighter blue/gray or reddish patches, which gives a mottled or uneven speckled effect. Although most breeds that can have merle coats also typically have white markings (such as around the neck, under the belly, and so on), and often tan points (typically between the white and the darker parts of the coat), these are separate colors from the merle; some dogs do appear completely merled with no white or tan markings. Merle can also alter other colors and patterns besides the usual red or black. 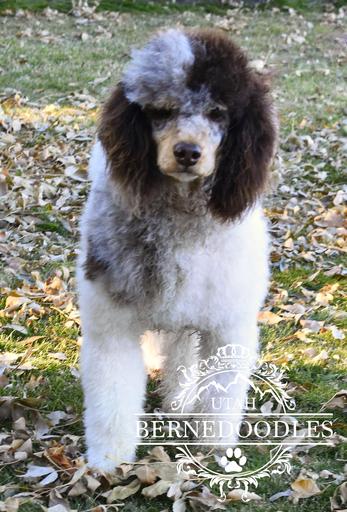