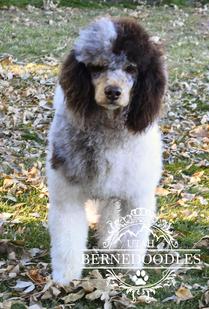 Why a Moyen mini Poodle?

We picked Chuck out of a large litter. We picked him because of his striking colors and confirmation. As soon as we brought him home we knew he was exceptional. He always holds himself like he knows he is royalty. He is one of the smartest dogs I have seen and I can already see his intelligence and temperament in his Mini Bernedoodle puppies.

His first litter was born December 19th, 2017. We watch the litter grow from day one and could not have asked for a better litter. When the puppies went home all of the families were beyond excited. We even had one of our families vets call me and place a deposit on one of our future Chuck Bernedoodle puppies because he was so impressed. We had other families tell me that their vet was so impressed with their puppy and that they were 2 weeks advanced in training for their age. We had the privilege of keeping one of the puppies back in our Puppy Kindergarten and agree with what the vets are saying.

One theory is that piebaldism may be the issue when connected to merle, or it may be piebaldism itself that is the issue.

Then there is the "The Cryptic Merle" theory. This theory is actually a subcategory of the Misidentification Theory. Merle is what is called a "modifier." That means it "modifies" (i.e. changes) a coat color that has already been determined by genes at other locations. If merle acts on a black coat, the result is blue merle. If it acts on a chocolate coat, the result is red merle. And so on.

The final theory I have is that that merles have been in the breed and that mere is a "natural" occurring pattern in the breed, and that merles have often been misidentified as other colors. When I called AKC to register Chuck and asked about the color code to give him they said to give him code 146 and 002 this refers to a red and white dog with black markings. This leads me to believe that when looking at the color pedigree 5 or 10 generations back you would not know if the dog was actually a merle or a parti meaning merle could be in the pedigree without proper identification.  You can learn more about Merle Bernedoodles on our Merle Bernedoodle page. 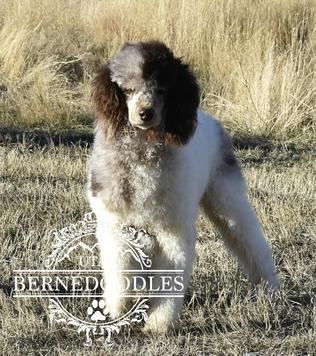 Chuck is our first Merle to join our Bernedoodle program. The merle color is a controversial topic among poodle breeders. People often wonder where the Merle gene came from and how did it get into the poodle gene pool? I get this question all the time.  I have done a lot of study of the merle gene in the poodle gene pool and believe that it was not caused by introducing another breed into the gene pool but, in fact, it is a mutation that occurred naturally.

Merle is probably the most misunderstood and hotly debated dilution gene in the poodle. Many believe it must be a recessive gene because it doesn't affect the appearance of red, apricot and red or diluted colors such as blues and silvers. In addition, it can be hard to see or not evident at all on black and brown dogs (cryptic).  Not only is its appearance illusive to breeders but it has confused scientists and it is still not completely understood.

The merle pattern has been studied many times and the last study released in 2006 emphatically stated that merle was caused by a mutation in the gene called SILV or PMEL17. The research was believed to be so solid that tests were offered to breeders to identify Merle in their dogs. However, as of March 2009 the company who owned the patent for the test, Idexx, stopped offering tests as they discovered the scientists Identified the wrong gene. SILV is not responsible for merle. The gene they decided was merle (SILV) actually turned out to be for a form of piebaldism, not merle. 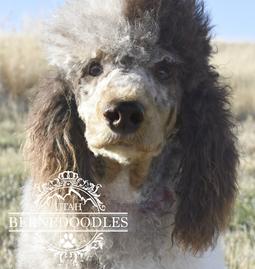 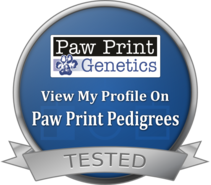 How to Produce Merle Poodles?

You might be wondering why I would add a Moyen Mini Poodle to my Bernedoodle program. After breeding Standard and Mini Bernedoodles for almost 8 years, I decided I wanted to create a Mini Bernedoodle litter where all of the puppies have perfect confirmation. We found when breeding toy poodles to our Bernese that some of the Bernedoodle puppies had long bodies and shorter legs.

Chuck is one of Utah Bernedoodles Moyen mini poodles we chose for our Bernedoodle program. He is laid back, cuddly, and intelligent. He is one of the most outgoing poodles I have seen and passes that to his Mini Bernedoodle puppies. He is 20 pounds and 15" He is the perfect size and has the perfect confirmation to produce puppies with the blocky build of the Bernese.

One thing I look for in my poodle males is a stocky build and stocky head to compliment the Bernese and keep the Bernedoodle puppies stocky. He has the perfect square build. He is the most well-built poodle I have ever seen. Chuck loves to meet everyone and nothing scares him. He goes everywhere with me.

Just for fun, we decided to send out Chucks DNA to see what breeds he would come back as. We sent in his DNA to Wisdom panel and just like we expected he came back as 100% poodle. We knew his pedigree well and knew he was a pure poodle but just for fun decided to do it. You can see his results below.